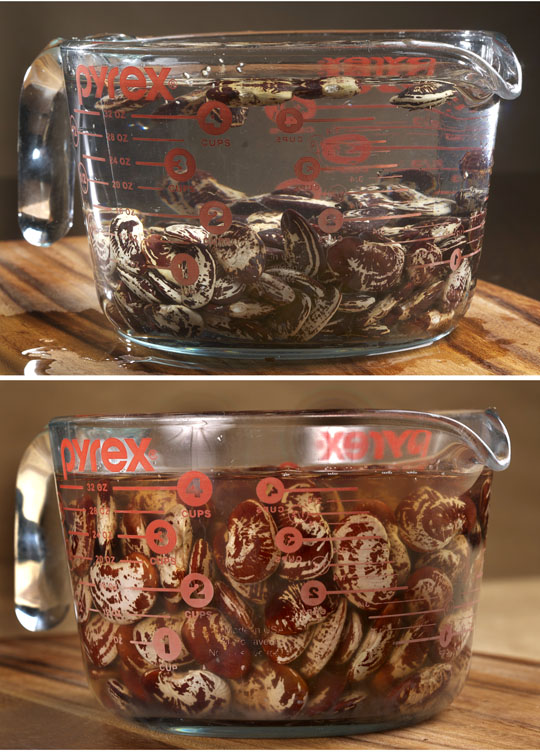 Christmas Lima Beans before and after overnight soak, photos by Donna Turner Ruhlman

Dried beans and salt. Dried beans and soaking.  Ask some chefs and they'll tell you add salt in the beginning and the beans will never get soft.  Some chefs have suggested that salt slows the rehydration of beans.  Others say, the slower the rehydration, the better the finished bean (fewer broken ones), so it's important to soak them overnight.  Others say it doesn’t really matter, or it depends.  One thing that is demonstrably true is that you don't have to soak your beans overnight; if you want beans for dinner, put them in water and cook them till they're tender or at least edible, no soaking, no blanching, just put them in a pot and cook them.

Wanting to get to the bottom of this, though, and having little scientific knowledge of bean cookery myself, I wrote to my friend Russ Parsons about this.  Russ is a long time food journalist, editor of the Los Angeles Times food section and author of excellent books, How To Pick a Peachand How To Read a French Fry, the latter devoted to exploring food science questions. He wrote back:

“I don't think there's a definitive word on anything about dried beans.  Seriously. It's all pluses and minuses. You don't need to soak them, but soaking them will cut cooking time, and some argue that it helps the beans hold their shapes. Not soaking them, on the other hand, really improves the flavor I’ve found.  After doing my experiments, I started salting at the beginning rather than at the end and I think that makes a big difference in flavor as well (seasoned beans rather than salty broth). But Steve Sando”—Steve is the country’s bean guru, owner of Rancho Gordo, purveyor of awesome heirloom beans (those are his Christmas Limas, above), author of Heirloom Beans as well as an excellent bean blog at ranchogordo.com— “who originally did the same, now says that he salts roughly halfway through cooking.  He says this gives him the same flavor result but fewer broken beans.  I've tried that and it certainly doesn't seem to hurt. Besides, Steve cooks beans every day, I just cook them a dozen times a year.

“The whole bean thing has always seemed kind of perverse to me. For example, almost every cook in the US soaks their beans before cooking, while very few cooks do in Mexico—where beans are a part of the daily diet. At the same time, very few cooks in America soak their rice, while all over Asia and India, that's regarded as a necessary step.”

Customary sagacity and perspective from old Russ.  I next wrote to Steve, and he replied with many comments on the finer points of cooking beans he’s observed, but for him, it comes down to intuition, to kitchen sense.

“Despite the virtual daily cooking of beans,” he writes, “I still don't salt until, forgive me, the beans are my bitch, so to speak. There is a magical moment when the pot stops smelling like just mirepoix and water and starts smelling like beans.  You can taste one.  It's not done but you know you've won. There's no turning back for the bean. This is when I salt. It's about three-quarters of the way through.”

Of course we now have a new food science and cooking encyclopedia, Modernist Cuisine, to go to (my NYTimes review of it seems to have caused a small but healthy brouhaha on the internet). Let's see if it can help us. Lo! Yes, indeed! It suggests a test. Cook beans in water with some baking soda to make it alkaline. Cook other beans in tap water and in distilled water. The beans cooked in alkaline water will get mushy. The beans cooked in tap water, if it is especially hard, may never get tender.  Beans in distilled water should cook just right. True to its exhaustive nature, the book also suggest cooking beans in deionized water, which is not pleasant to drink, it says, but will result in tender but not mushy beans (why you would cook food in something that tastes unpleasant, the book does not say). But the book comes through: if your beans never seem to get tender, it may not be the salt, or the soaking, but rather the minerals in your tap water!

Hope you're all full of beans this weekend! (And watch the Sando video below.)

How To Cook Beans:

If you soak, use the soaking water for cooking as well. (If beans gives you or your bed partner serious gas, Harold McGee suggests that blanching and rinsing can reduce resulting gas, but will also reduce flavor. Not recommended. Gas is natural, probably good for you—or at least indicates lots of healthy gut bacteria—and when properly released can result in much good humor.)

Add the beans to the pot and cover with water by about an inch (this is not optional).  Simmer gently tender—it can take hours depending on the bean. If you cover the pot, you probably won't have to add water, but keep an eye on them anyway; if you don't cover it you will likely have to add water. When the beans are your bitch add salt, enough salt so that the water tastes properly seasoned.  You can serve as is, with the pot liquor and some cheese and acid (lime juice or red wine vinegar).

Here's a great 3 minute How To video by the Bean Kingpin himself (Steve, you need a bigger cutting board! But I love that cooking pot! Where can I get one?! I'll trade you a proper Boos board for it!)

If you liked this post on beans, check out these other posts: