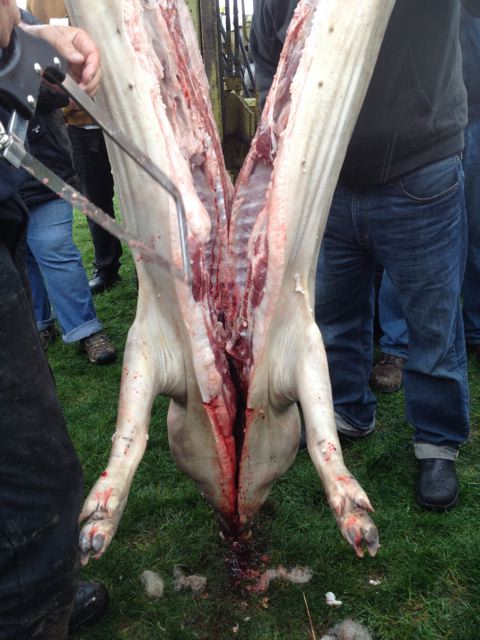 Organs and viscera removed. Christoph cuts through the center of the spine with saw and cleaver. (I took all the photos and the video below.)

Christoph Wiesner, the Austrian butcher who raises Mangalitsa, is always tense before the kill. Last year, he told me, yes, he was nervous because it wasn't his pig, the pig didn't know him, he couldn't know what the pig would do. Under normal circumstances the pigs have spent their lives with him and the week before they are done in, he brings the captive bolt, the stunning device, into pens so the pigs are used to even that. The pigs are calm throughout. This year, at Pigstock in Traverse City, MI, Christoph was not only unfamiliar to the pig, he was miked so that his every word echoed through speakers. Furthermore our crowd gathered around to witness the kill. Our Mangalitsa was clearly thinking "This can't be good." But it was over quickly (the full video is at the end of this post, along with Christoph's careful and descriptive evisceration; if you need to know how, here it is).

A half hour after cleanly stunning the pig, with the pig on the table scraped of all its wooly fur, Christoph showed signs of ease. His clenched jaw and uneasy eyes were gone. He smiled and said, "The stun was good, the stick was good, the hair is off. Now, I am happy."

No small thing to kill another animal, one that weighs more than you, no less. His stick was perfect—"you learn by doing," he said—this was clear when he split the hog. He showed us where the bolt had penetrated the skull into the brain (not much there, by the way, each lobe about the size of an apricot). The muscle showed no sign of stress, and the organs were evidence that the pig had been well tended and was healthy.

Would that more chefs had access to this kind of experience because, for those who cook and serve and eat meat, it encourages careful and thoughtful treatment of our animals, of all our food. Thank you Christoph and Isabel, and Chip Hoagland and his team for organizing Pigstock yet again.

Two things I came away with this time was how well the Mangalitsa, which is out of favor with chefs here due to the overabundance of fat, can be used when broken down properly (Christoph removed each rib individually, to preserve the meat between the ribs, for example). A restaurant wouldn't want to only bring in Mangalitsa, but they could be a useful part of a larger pork program. Also, I was reminded of the importance of practice, of doing the same thing over and over, when I watched Polcyn work; he has become a masterful butcher since I first met him in 1997.

I truly hope that readers here will seek out their local farmers for humanely raised and killed and thoughtfully butchered meat.

Below are pix from a big pig week with my partner in Charcuterie and Salumi, Brian Polcyn, beginning in Stonington, Maine, where Brian lead a two-day pig demo for chefs and food enthusiasts (one chef, bless him, drove up from Philadelphia) to promote a culinary institute on that island. 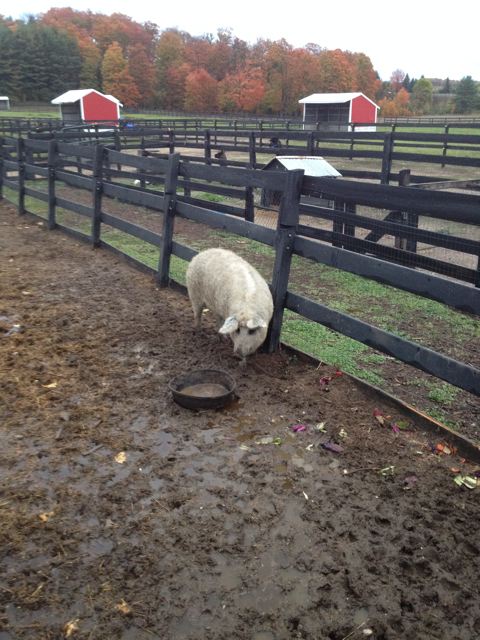 The Mangalitsa shortly before the kill at Black Star Farms (an extraordinary place, worth visiting if you're ever in northern Michigan). 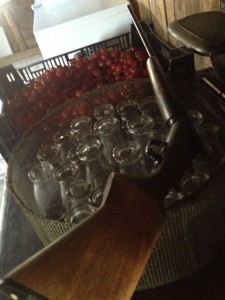 Captive bolts, the typical stunning device, cost I was told about $1500. The single pig in Maine was put down with this rifle. 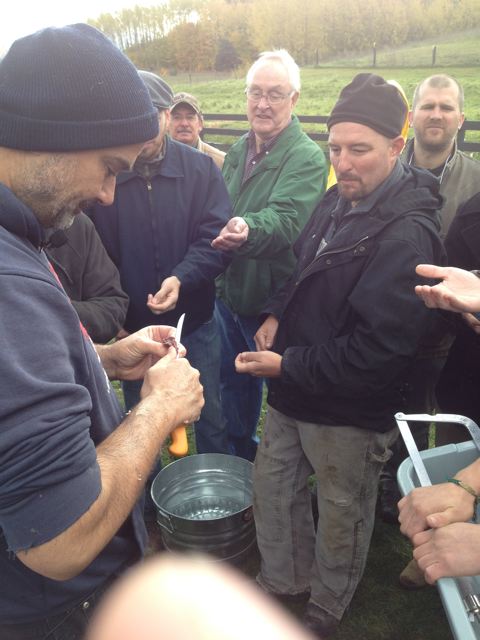 After removing the liver and examining it for signs of parasites (none), Christoph cut pieces of it for observers to taste. It was warm and only mildly livery, pleasantly succulent and minerally. 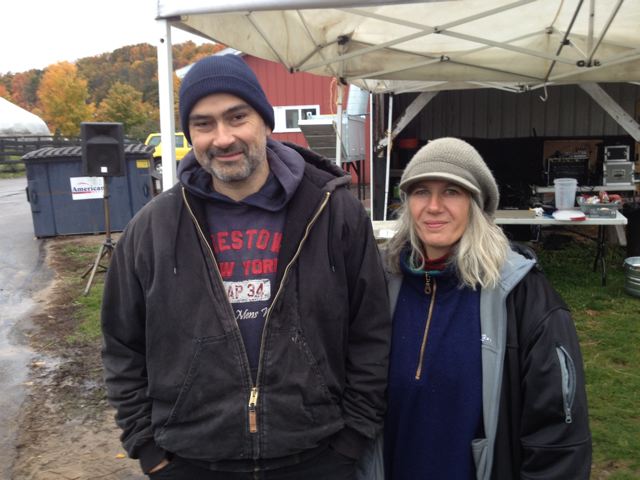 Christoph and Isabel Wiesner, husband and wife farmers since the mid-1990s, when they decided they wanted to grow more of their own food. It's now how they make a living for themselves and their four children. This is before the kill and they are both nervous. 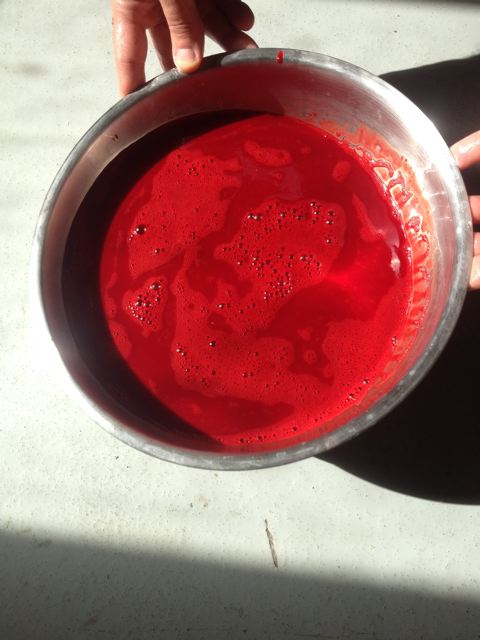 Fresh pig's blood makes extraordinary blood sausage. Brian made the best I've had in my life in sort of a last-minute demo in Maine. 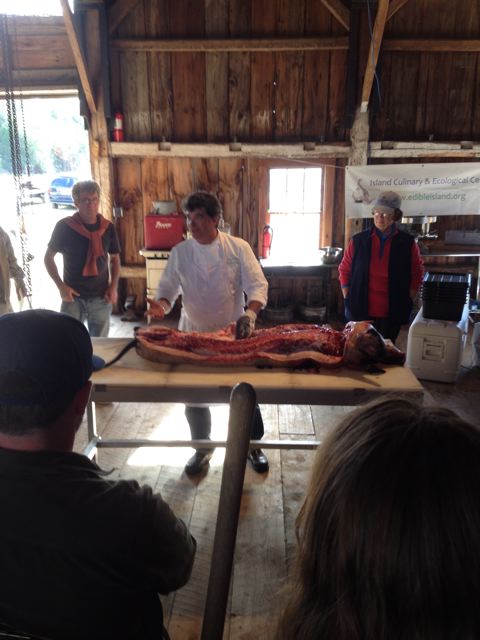 Brian in Brooksville, Maine, demonstrating both American and Italian hog breakdown. The woman who raised the pig is at the right. She was nearly in tears at the end of the communal meal, grateful for once to be able to share in the cooking and the eating of the animal she had raised with people who treated it with such care. 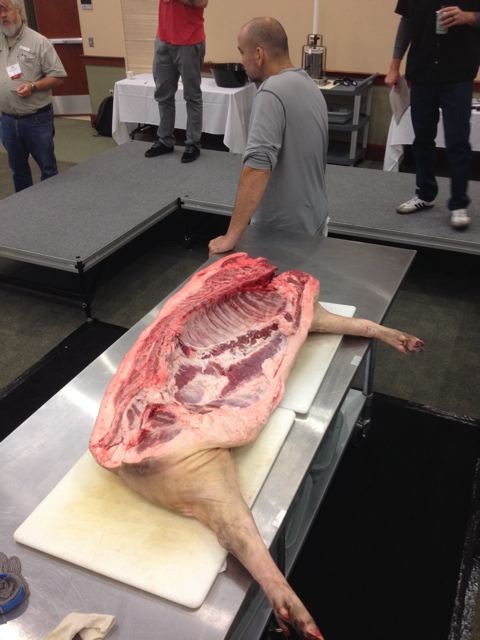 Christoph talks with the chefs before he demonstrates his method of hog breakdown. 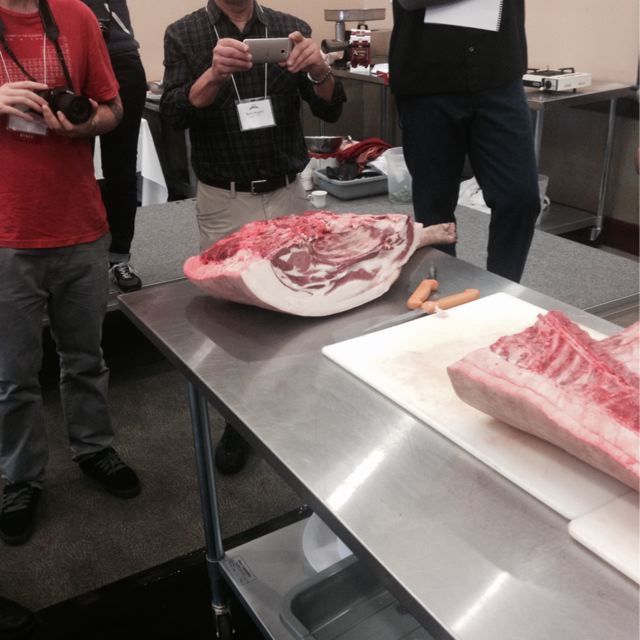 This was a small Mangalitsa, but still, you can see the abundance of fat and relatively scant amount of meat (thus the need for careful butchery). 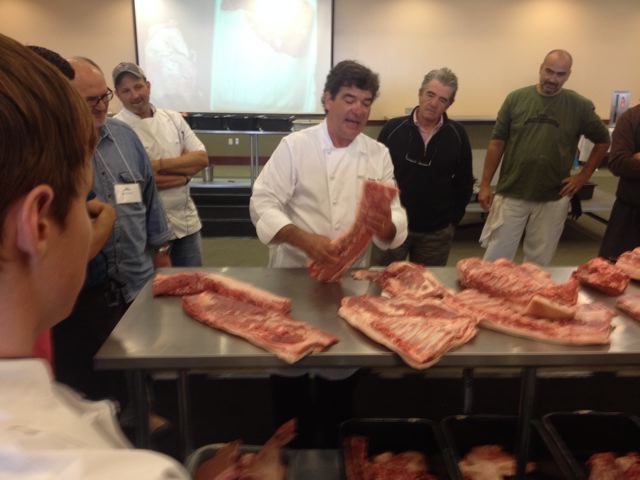 I posted on this earlier, but the difference between a factory hog and a farm-raised Berkshire-Duroc or Mangalitsa is enormous, as Brian demonstrates here. Notice the paltry belly at left. Now that was a poorly treated pig, and shame on us for it. 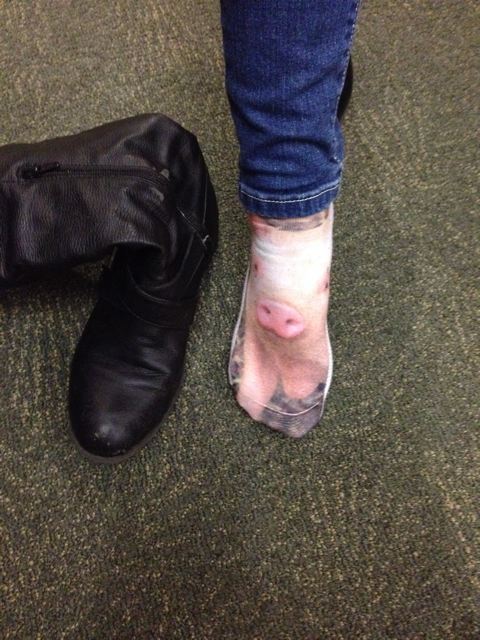 This is a video of the kill. The pig is clearly nervous because of all the people and the scary Austrian with the captive bolt.

The Evisceration, part one

This was a male, so Christoph took care of that part first (it had been removed long ago, but the interior part needed to be separated), then works his way down the pig in a clean evisceration, organ by organ.

Conclusion of the evisceration (showing the gall bladder, which you can put down your disposal to help remove grease; which is what it does in our personal disposal).