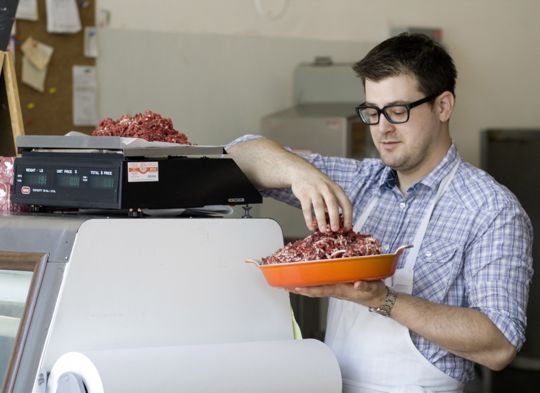 When I published Ruhlman's Twenty last year, Rob Levitt, proprietor of an old-school butcher shop in the great meat city of Chicago called The Butcher & Larder, invited me to talk about technique while we made sausage and soup. It was so much fun and Rob, who happened also to be a graduate of the Chef Pardus school of kick-your-ass, was such a delight, I'm doing another Chicago event with him on Friday, October 19, at Floriole Cafe and Bakery, with my partner in Salumi, Brian Polcyn. (Details here on Rob's site.)

It's a great pleasure to see people such as Rob and his wife, Allie, doing things the right and the good way. Making use of the whole animal, for instance (Rob, what the hell is a "chuck flap"? a "Paleron steak"? Want!). I'm delighted to introduce this quintessential meat nerd with his first guest post.—M.R.

It’s as easy as a pound of ground beef.

We sell a lot of great stuff at the shop, but rarely do customers glow more than telling us of the “best burger EVER….” Or perhaps a roasted chicken, a pot roast, or a pot of tomato “gravy” made with pork neck bones (finally—someone has these…). For the slightly more adventurous the tale might be of their first links of homemade sausage, and often I stand and listen to the story of the guy recently gifted with a Big Green Egg go into the most intimate details of his first smoked pork shoulder.

We sell a lot of strange things. Yes, tongue or brains, but also lesser known cuts that you probably haven’t seen before. Cuts that don’t make it into the supermarket grab 'n' go case. Chuck flaps, sirloin flaps, fresh ham cutlets, and pork sirloins move quickly, and by the end of the weekend, we are consistently out of Paleron steak and lamb sirloins.

Like the yet-to-blossom nerdy kid of the meat world, these cuts are often ugly and awkward, but really delicious.

We love introducing our customers to new and interesting cuts, and with meat prices rising, we know that a selection of non–rib eye, non–pork chop cuts is necessary. But the idea of enhancing the ordinary—taking regular recipes people have been making for years, recipes first tasted off of Grandma’s wooden spoon, and making them better than sum of their parts—is what makes it all worth it.

My Twitter feed (@butcherlarder) fills up fast with photos of burgers, pizza with B&L sausage, a plate of bacon and eggs (B&L bacon or a first attempt at homemade bacon made with our bellies), and beautifully golden roasted chickens resting in anxious anticipation of being carved.

What we’ve learned is that it isn’t about the ground beef. The raw chicken we sold you isn’t the star, nor is the bottom round for the pot roast. The pork belly is beautiful sitting on the little wooden pig in our meat case, but it isn’t what made your brunch.

The experience—start to finish—is what our customers are celebrating, and the best celebrations are the ones that don’t involve a special occasion; rather. they are just special, rewarding, fulfilling, and satisfying in and of themselves, on any day.

You made bacon just to make bacon and you shared it with your friends and family. You brined and roasted a chicken perfectly on a Tuesday night—just  because—and dinner was awesome.

To open your kitchen to friends and create a moment out of the ordinary. The satisfaction you feel when the ooohs and aaahs have died down, the bird has been carved, and silence falls over the dining table, that palpable silence heavy with comfort and satisfaction, is what we’re selling. A reason to go home and cook. 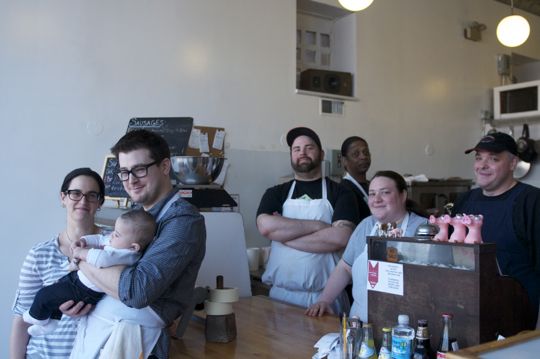 Recipe for the Perfect Start to a Day Off

While I normally offer up an actual recipe, with ingredients and measurements and serving suggestions, this post was about the simple pleasure good food can offer. Instead, I am sharing my favorite way to start a day off with my wife and daughter.