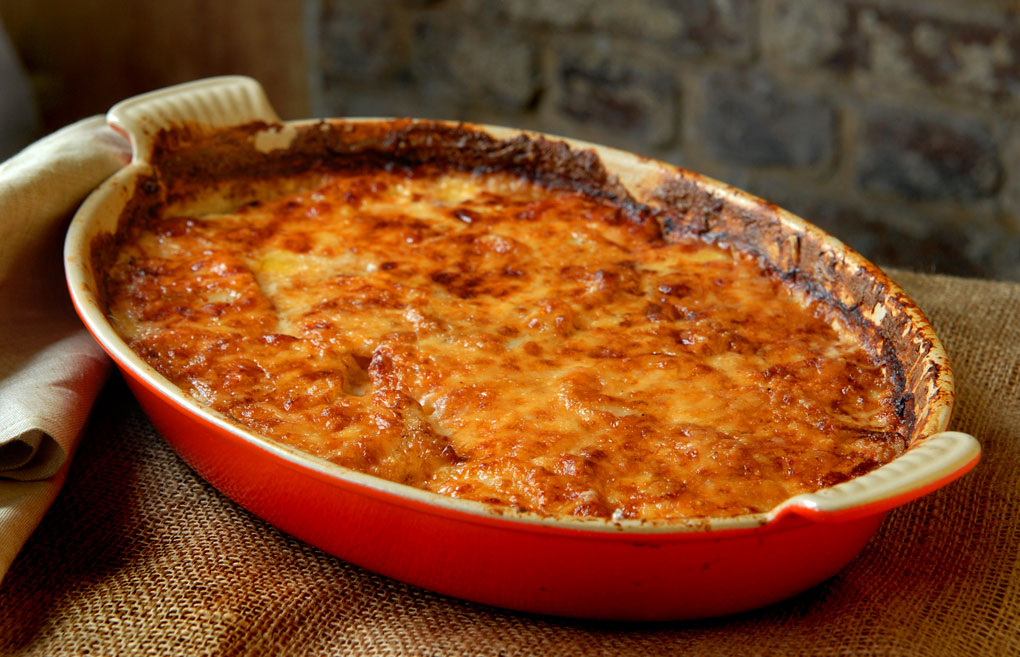 Here is the classic potato gratin that I made at a makeshift studio during the first series of the Le Creuset demo videos. My daughter had come along to see lovely Charleston, look at the College of Charleston, and generally take in the scene, and the only comment when we returned to Cleveland was, "Why don't you ever make that cheesy potato thing for us?"

Nothing of course would have given me more pleasure, had I only thought to do it. Indeed, this is a dish so easy and delicious and do-ahead-able, it's a shame I don't make it monthly during these cold winter months. Simple indeed. Layer sliced potatoes in a dish, give them a good shot of salt and pepper and several scratchings of nutmeg, cover with half-and-half, and bake covered till tender. When ready to serve, top with good cheese, Gruyère or Emmanthaler or the like, maybe a topping of Parmesan, and broil till, well, till it looks like Donna's gorgeous photo above. Both photos and dish were created in adverse conditions and still it was my daughters single request from her trip to Charleston.

I suppose you need to learn how heavy or light to go on the seasoning, and yes, it's a good idea to throw some cheese in between layers of potatoes, but honestly, think about it, potatoes simmered in seasoned half-and-half till totally tender, then topped with cheese and broiled. Do you need a recipe for that? Nope.

But you can see a demo on the original post, with, sigh, an actual recipe, or watch it on YouTube. But in this case, I urge you to wing it.

Me, I'm just back too early from the Charleston Wine and Food Festival, a splendid affair. My daughter, a College of Charleston student, conspired to be in Cleveland while I was there. I should have made more potatoes gratin when she was growing up. *sigh*