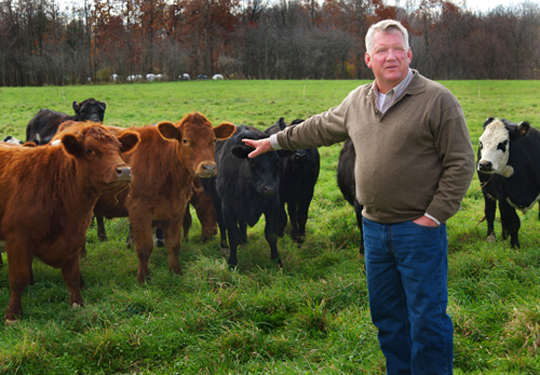 I’ve always wanted to like 100%-grass-fed beef, but it always made me a little sad.  With the first bite, there's promise but I always find it ultimately lacking the flavor and succulence of beef finished on grain. Having bought in wholly to Michael Pollan’s argument in favor of the natural elegance of beef grown on green grass and clover, being devoted to people who farm for a living the best way they can and wanting to support them, and simply liking eating food raised near my home, I so wanted beef that wasn’t grown wading in CAFO waste, slaughtered en masse, and packaged in plastic and Styrofoam before it reached the grocers, that I held out hope.  But ultimately I couldn't justify paying so much more for it.

I'd all but given up when I ordered a strip steak from Aaron Miller’s farm, at Karen Small's Flying Fig on Cleveland's near west side﻿. I'd eaten this Ohio farmer’s beef—as a tartare, as a burger—at a couple restaurants but I’d never had a cut from the loin,the litmus test.  My fork dropped with a clank to the plate.  This was it.  I asked our server to bring out the sous chef to confirm this was, in fact, from Aaron Miller.  Because I didn’t believe it.

When Doug Katz, chef owner of Fire Food & Drink, another beloved Cleveland restaurant, called to say a lunch was being planned at Miller’s farm for a local TV show and would I like to come out, I immediately said yes and Donna and I drove due east on Mayfield near out to the Pennsylvania border just south of Pymatuning lake.

I wanted to know how his steak was so different from every other grass-fed steak I'd eaten. While it’s infinitely nuanced, the basics are few.

“It starts in the ground,” he said.  He covers his starting field and his finishing field with a mixture of micronutrients that include zinc, copper and boron.  This results in protein rich grasses and nutrient-dense, nitrogen-rich clover.

The grass is precious to him. Local hunters who take their trucks past his fences rolling over this grass infuriate him.  He knows when to set the cows out on each paddock of fresh grass and how long they can eat it.  If the grass is too old, it will have lost its nutrition, if they eat too much of it, it won’t grow back well.

The grass he grows to feed the cows all winter as hay must be cut before Memorial Day or it will be deficient.  “If you’re at the Memorial Day parade and you don’t have your hay, you’ll be behind the eight-ball,” he says.

And the final part of the equation is minimizing stress.  He buys 10 or 12 calves every couple months and puts them on a grass-rich, organic pasture to help relieve the stress of being separated from the cows.  They’re then strip grazed for a year or so, moved every day or every other day to a new strip of his 60 acres.  They’re then finished on a separate 30 acres a mile down the road.  This acreage is heavily enriched with the micronutrients.  The grass is deep green and grows in thick tufts, the clover huge and dense.  Each Wednesday he takes 2 or 3 cows to slaughter, done nearby by a friend.  The carcasses are hanging 50 minutes after they leave their field.

“There are two things you don’t ask a grass-fed-beef farmer,” Aaron said. “What weight do you slaughter and how old?  Gotta get that out of your head.”

Every animal is different, like you and me, he continued, some tall and slender, some short and stout.  You can’t go by a weight or an age.  Aaron, age 52, who owned an auto parts store out here where he’s lived his whole life, has always farmed and for years raised dairy cows on the side.  Eleven years after giving up his auto parts store to raise cattle full time, he’s learned when a grass-fed cow is ready.

“There’s Doug’s cow,” he said, pointing to a Hereford-Angus blend he’d picked out for chef Katz’s next delivery.  “See that brisket, how full it is.  Now look at that Angus next to her, see how flappy it is.  Not enough fat.”  They also develop two big rounds of fat on either side of the tail, he explains.  And you shouldn’t see any trace of ribs.

For more about Aaron and his farm, visit his site, millersgrassfed.com. 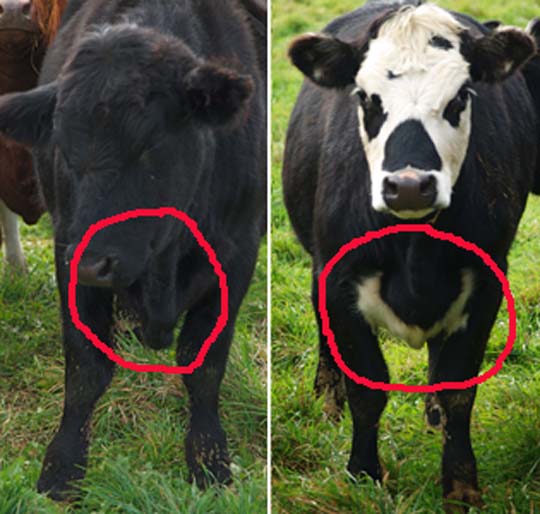 Biggest mistake most grass-fed-beef farmers make, he said, is not letting their cattle get fat enough.

It’s all about the fat.  And this grass-grown fat is some of the best there is. 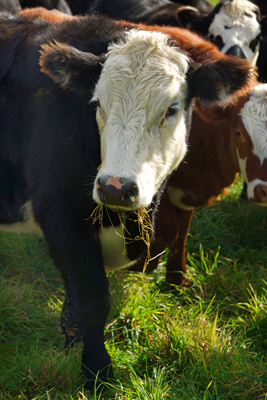 And here's a video  of the Miller farm, cows, chickens, lambs and pigs, all pasture-raised. These are happy animals.