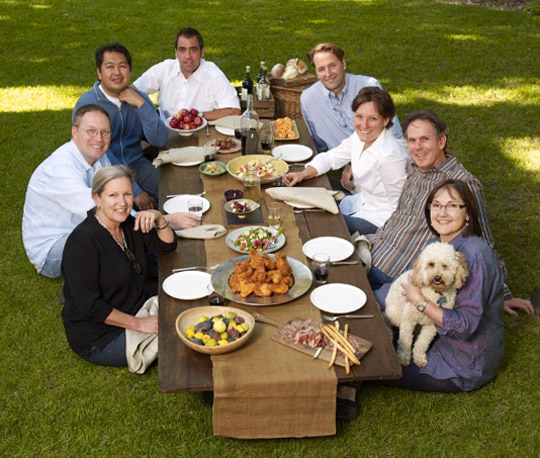 A lot of friends emailed me last month asking what I thought about the stink bomb Julia Moskin dropped on the cookbook world in her bitter account of chefs not writing their own books (or sometimes not even reading them). Then there was the dustup that followed—Paltrow histrionic with the Times, Regina Schrambling (indefatigable NYTimes gadfly) calling bullshit on it all, time.com weighing in decorously. So this is for my friends who asked.

In Michael Symon’s book, Live to Cook, he includes a recipe of mine (naturally fermented pickles), and I wrote the headnote in his voice. How meta!

The above photograph is by Deborah Jones, a different version of which appears in Ad Hoc at Home, by Thomas Keller. But wait, that’s Deborah in the picture (I am in love with her), so how did she take it?! Wait, I wrote that book, not Keller, and Susie Heller and Amy Vogler wrote the recipes that were largely created by Dave Cruz, Ad Hoc chef, and Jeff Cerciello, who opened the restaurant with Dave (both awesome cooks—Jeff now running the excellent FarmShop in Santa Monica). And what about David Hughes (to say nothing of his wife and colleague in design, Joleen, not pictured), whose playful graphics and layout and lovely cover bring all the components of that book together? Also not pictured is Artisan publisher Ann Bramson, the book’s editor, who likewise engaged heavily, heavily, in all aspects of that beautiful book.

I lead with this photo (which was in fact set up and lighted by Deborah until it was just so—took forever!—and then she scampered, yes scampered, down the ladder, lest the light change, and one of her able assistants clicked the shutter a number of times whilst we pretended to be enjoying a picnic lunch)—I lead with this photo because these books, big volumes heavy on recipes, words, photos, and design, not to mention literally heavy, are group efforts. What do people think?! (For the record I am honored, truly, to be amongst the folks up there in that photo, whom I cherish, each and every one truly excellent in their field; I bow to you. God, did I get lucky.)

Interestingly, Lisa Abend, author and journalist who wrote the above-linked time.com piece, had been reporting her own ghostwriting story, a more intellectually driven piece on how cookbook ghostwriters work, for the NYT Book Review (it was spiked after Moskin threw her watermelon off the top of the Times building).

And I do, like Moskin, admit to being somewhat baffled when people ask me what I do for the seven cookbooks I've co-authored: “Did you write that little essay about the chef up front?”

There are varying tiers of ghostwriting, and I’ve done it on many of them, so much so that I can’t do it anymore. There’s pure ghostwriting: talking to a chef, crafting his or her thoughts into readable prose that sounds like the chef (and hopefully getting at least some acknowledgment within the book).

Then there’s ghostwriting in which the writer, who, from hard work and often actual experience on the line and in the field, helps to shape the material, enhancing it with his or her own hard-earned intelligence. This kind of writer deserves to be on the title page of the book, if not the cover. An example of this kind of ghostwriter is Amy Scattergood, who wrote Good to the Grain. (I hear it ended badly between her and the chef. Whoever the chef is, I’m sure she’s a talented baker and the recipes in the book are excellent, but they are accessible to a wide and diverse audience only because Amy is so talented, not the chef. With great respect to bakers and chefs everywhere: I know a lot of really excellent chefs and bakers; I know fewer great writers about food and cooking).

Moskin recounts some hilarious (and appalling) chef-ego antics—she “once took dictation in a spa from a chef receiving a pedicure”! (Julia, please name names, so I can make fun of this person! How does the Times let you get away with not validating that sweet gossip with a name? I’ll bet it was a guy!)

I have one thing to say about chef cookbooks and ghostwriting or collaborating and where the line is, and it’s important: I am aware of only one, one, chef cookbook that was written word by careful word by the chef herself in the solitude of her home. Judy Rodgers. Her Zuni Café Cookbook is fabulous. If there is any other chef out there who has written every word of his or her cookbook, please email me, as I’d love to add your name to the list and buy your book. (Update: two people have commented that Mollie Katzen wrote and illustrated the phenomenally successful Moosewood Cookbook, presumably while cheffing at the collectively-owned, Ithaca, NY, restaurant in 1977, long before the celebrity chef era.)

(Bourdain, don’t send me any emails, you weren’t a chef when you “wrote” your cookbook. But you damn sure can write. And you do make a mean cassoulet. And have a TV show! And a publishing imprint! Good god, why don’t you have your own jet?!)

My career as a “ghostwriter” began with The French Laundry Cookbook, which, being a reporter, I reported. I hung out. I interviewed purveyors. I spent hours in the kitchen. I suggested I could learn the fish station. (Thomas: “Don’t even think about it.” Oui, chef.) I wrote that whole thing in the third person. At our first meeting Thomas said, “I want this book to tell stories.” I said, “That’s my line of work.” And that’s what I did: I wrote a completely unconventional third-person cookbook. The editor insisted it must be in Thomas’s voice. It must be coming from him directly. So I rewrote it. The whole thing. Thomas and I talked about cooking and I thought, that is fabulous, we need to highlight this and call out that! Tools of refinement (Thomas's very words!) Butter poaching lobster! The versatility of foie gras! Thomas, your purveyors are whacky! It was so second nature to Thomas, I'm not sure he saw how special it all was, but me, just out of culinary school and a brief stint on a grill station at a popular Cleveland restaurant, I thought, mother lode. From the CIA to here? Gift from God. Thomas’s knowledge and experience combined with my recognizing what needed to be out there. Then it was mercilessly, savagely edited. Good call for the book from Bramson on all counts, right decisions made in every way. Susie did all the recipes and we get billing on the title page.

Thomas is second to none. Period. I’d have never asked my rabbit purveyor to bring them to me alive next time. Regrettably, the title of that story, “The Importance of Killing Bunnies,” was toned down in the editorial process. As, sigh, I knew it would be (part of why I love David Chang’s mania, not to mention his colleague in words, the excellent Peter Meehan, and I’m hoping The French Laundry Cookbook helped pave the way for the straight-shooting, in-your-face, motherfucking Chang and Meehan and their excellent work).

The next Keller book, out this fall, is the Bouchon Bakery Cookbook. It’s a stunner, folks, as you will expect, but it was heavy sledding for me. I had to write in Thomas’s voice, the man on the cover and the top of the TKRG tower; I had to write in Sebastien Rouxel’s voice, executive chef of all the bakeries (he and I speaking in his second language, which proved very hard, even though Sebastien is one of the smartest, best pastry chefs and most thoughtful chefs, period, I’ve ever worked with). And I had to tell head bread baker Matt McDonald’s story in the first person and write the bread headnotes in his voice, which was the easiest part because he thinks and talks just like he drives his motorcycle. Oh, and I wrote a short essay about Sebastien, just because I wanted to, in my voice. So that’s four voices right there. And let’s not forget the bulk of the book, the raison d’être. The recipes—observed, tested, written, retested from the written version, copyedited (thank you, amazing Judith Sutton, the earth’s most amazing copyeditor, yet another member of this team), then rewritten again—their voices, Susie's and Amy's, are the voice of the recipes, intermingled with Sebastien’s and Matt’s.

So, the Moskin piece. It kind of simplified things in the wrong direction. Cookbooks are all group projects (except for that rare exception, Judy Rodgers and her editor Maria Guarnaschelli, mom of chef Alex). And who knows? I still feel new at this game. Maybe I’ve got it wrong. But if so, only in the same way Moskin did, oversimplifying it and emphasizing the personal over the useful. (Always the writer’s Achilles' heel.)

My response to her piece?

We stay in situations with our own consent. You don't like it, leave. If it ends badly, learn from it and share what you know. Period. Which is what Moskin did. So, thanks to her for that.

My advice to young writers lured into writing a cookbook "with" an up-and-coming-hot-new-restaurant-chef-in-discussions-with-FN-repped-by-WM with the promise of more and better work, only to find out the chef is an egomaniacal, disrespectful dickhead: Unbuckle and roll because that car's on its way off the cliff. Bottom line to young writers and young chefs: Work hard to work with good people. They're out there in abundance. Find and work with good people. It makes all the difference and will for the rest of your life.

If you liked this post on Ghostwriters, check out these other links: