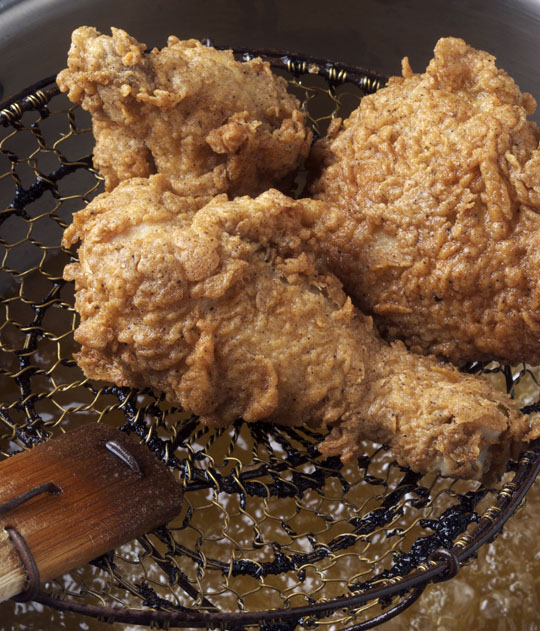 For her high school graduation lunch last week, my daughter asked for my fried chicken. Normally, I break down a chicken into 9 pieces and cook it and serve it. But we’d invited friends, bringing our total number to 20. Fried chicken for 20 is different from fried chicken for four. I had no intention of spending all that time frying while hosting the lunch.

But it wasn't until we were seated and one of the guests, while biting into a juicy drumstick, asked, “You can do this ahead of time?” did I realize that I must, must post on this subject, to deepen our understanding and encourage more cooking of one of the greatest dishes in the American repertoire.

Yes, this can be done the day ahead. Follow all the steps below, though you don’t need to cook everything all the way through, just get the pieces beautifully browned, let them cool, then refrigerate them, preferably on a rack (space can be an issue so isolate fridge territory before you begin). On the day of the meal, pop them into a 300°F/149°C oven for 30 to 40 minutes (or longer, though be careful not to overcook the breasts—use your common sense on that one, as the breasts need only about 20 minutes total to reheat).

Use convection if you have it. The juices can begin to drip down and make the bottom soggy, so if you think about it, give the pieces a turn midway through cooking.

What follows is a previous post on the basics of fried chicken, a dish more people should do at home. This is for THE BEST fried chicken. (If you're pressed for time, simply rolling the chicken in heavily peppered flour and slipping the pieces into hot fat is perfectly acceptable. [What a felicitous pairing of words: Hot fat. Hot fat. Never noticed how pleasing those words are when set next to each other.])

How to Fry Chicken

The study of fried chicken began for me in 2007 during discussions, observations, and eating with chef Dave Cruz at Ad Hoc in Yountville, CA, as we worked on the book Ad Hoc at Home. While Ad Hoc’s method of flour-buttermilk-flour is not unique, their trial and error experimentation with various methods (including sous vide) proved to them and to me that this method is indeed superlative.

That was 2007, and I’ve since fried a lot of chicken. My recipe is in Ruhlman’s Twenty. I think it’s better than the one in Ad Hoc (I do a rosemary-lemon brine and season my flour differently). But talk to another chef, such as Michael Symon, and he’ll say his is better. If you want a great starting point, the exact Ad Hoc recipe is at the Amazon book link for Ad Hoc at Home above; it’s excellent. Here I’ll address the key points of great fried chicken, with a nifty slide show of pix by my wife Donna. (And I should pause briefly to thank her; as you can see, the gorgeous process shots, which fill Ruhlman’s Twenty, are really what make the book both a great teaching tool and a powerful object. Thank you, DT, for your great work!)

A couple of things to make clear at the outset, especially to those wary of deep-frying. Use a big high pot, fill it no more than one-third full, and you shouldn’t have any worries about fire (if you ever do have one, don’t freak out, simply put a lid on it; those around you who are freaking out will marvel at your calm control).

About fat, yes there’s more fat in fried chicken than in baked skinless breast, but not all that much. Deep-frying gets a bad rap. Eat a balanced diet, which, as far as I’m concerned, includes fried chicken once every few months for its spiritual and mental health benefits in addition to being fun to eat.