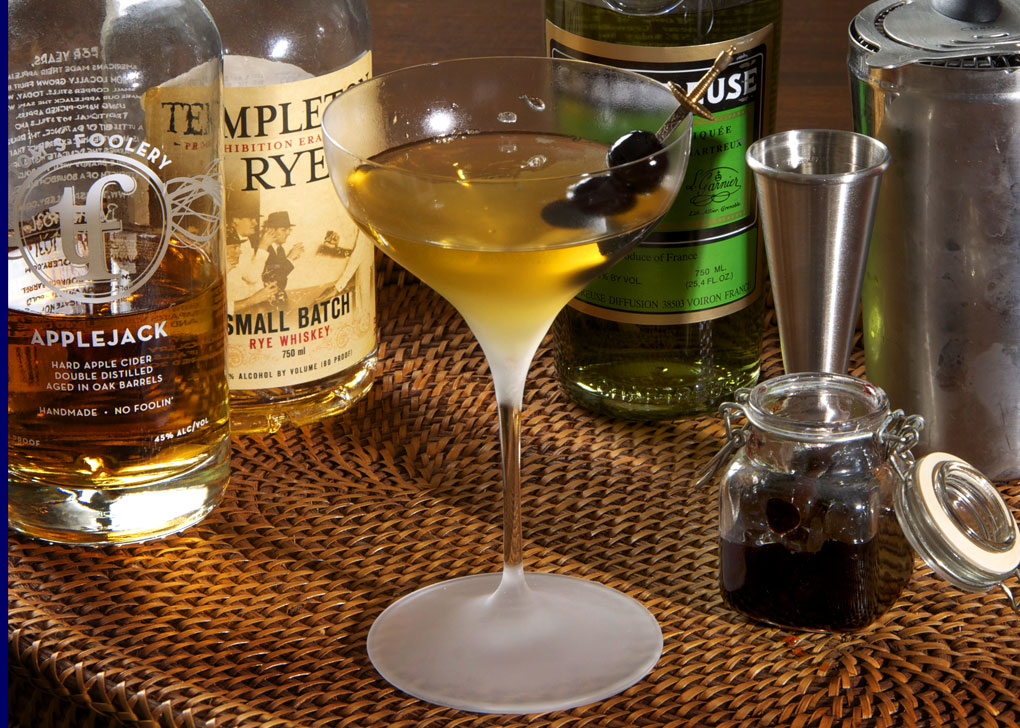 One final cocktail using applejack, simply from a couple of web searches. This is my final post until after Labor Day, so I wanted a cocktail that packed a wallop. With three high-proof spirits, the Diamondback fits the bill. I also wanted something medicinal, so that I stay healthy while I take a late summer break from the blog (alas, I have first pass pages of the new cookbook to scour and the first draft of the next to get off to my venerable publisher Little, Brown). But some break I will be able to take. And it shall begin this evening with the Diamondback, a cocktail with a healthful bite.

Chartreuse, a high-test medicinal liqueur made by French monks, needs to be balanced with delicious cherries; in my mind these are a critical component of the cocktail.

Once again the cocktail features the American apple brandy we call applejack, mine distilled about a 30-minute drive from my house from several varieties of Ohio apples. I posted earlier about Tom Herbruck, who created Tom's Foolery, a company that distills applejack—and bourbon and rye whiskey. He did it because he had to. He did it because something unreasonable compelled him. I am grateful for such unreasonable people and the wonderful stuff they produce. If you're curious about how he makes applejack and how grain becomes alcohol becomes whiskey, especially the critical role of germinated barley (malted barely), I'm posting two emails of explanation from Tom because they're just too interesting to die in my inbox. Pretty soon I'm going to be applying for a job out there.

Though, I think, for now, a cocktail when the day's toil is done.

Tom Herbruck on how he makes applejack and more general notes on the spirit, followed by his notes on the purpose of malting barley—M.R.

From emails by Tom Herbruck

We start by selecting at least ten varieties of apples, grown locally, that are fresh and free from breakage or any defects. The apples are crushed and pressed into sweet cider. Over a period of several weeks, we ferment the sweet cider into hard cider, which has about 6% alcohol.

To turn the hard cider into applejack, we distill the cider two times in traditional pot stills. Through the process of distillation, the alcohol from the cider is vaporized and then condensed, increasing the alcohol to about 120 proof.

At this point, the freshly distilled applejack is clear and has a strong, fresh fruit smell. It is delicious, but a bit hot, and to some people the strength of the flavor is overpowering. In several European countries there is a tradition of serving young fruit brandies just like our newly distilled applejack, such as eau de vie from grapes, kirshwasser from cherries, or slivovitz from plums.

To produce Tom’s Foolery Applejack, we transfer the young and clear applejack to oak barrels and mature it for at least two years, and frequently much longer. We use a mixture of many different barrel types to mature our applejack, including used whiskey and wine barrels, used cognac barrels, and new toasted white oak barrels. By using a variety of barrel types, we are able to add additional complexity to the applejack and to achieve just the right level of oak contributions. At bottling time, we select 6 mature barrels and blend them together to achieve the perfect blend of flavors.

We never add any sugar, coloring or flavoring to our applejack. Prior to bottling applejack, we add just enough water to bring the alcohol level down to exactly 90 proof. So, the only ingredients in our applejack are apples and water. Legally, applejack and apple brandy are identical. Both are defined in the Code of Federal Regulations as “a type of fruit brandy made of apples.” Some people confuse applejack with “blended applejack,” which is unfortunate, because the two products are quite different. Blended applejack is a mixture of applejack and neutral grain spirits (vodka), which creates a less flavorful and less expensive product.

A second misunderstanding about applejack is that it is or was made by freezing apple cider. Freezing hard cider can and produce a delicious product and will indeed increase the alcohol content of the cider, but it’s hard to get the alcohol content above 15% abv through a freezing process, and applejack legally must have an abv of at least 40%. Undoubtedly in Colonial America there were many farmers who froze their hard cider to increase the alcohol content, which also increase the stability of the product, and some of those farmers likely referred to the cider as “applejack.” That’s a cool part of American history, but applejack to most Americans throughout our history has been a distilled product.

With regard to where the name “applejack” came from, I think that the origin of the word is likely lost to history, although there have been a couple of speculations that seem plausible. One guess is that the word “applejack” is a combination of the words “flapjack” and “apple.” Flapjacks were common in the colonial kitchen, and contained both apple fillings along with apple spirits. A second theory is that “applejack” gets its name from “jacking” or increasing the alcohol content in apple cider, either through freezing or distillation.

Tom’s Foolery Applejack recreates a flavor profile that Americans would have enjoyed through about 1700 and up until about 1850. After 1850, a series of events occurred in our young country, including the Civil War, Prohibition, and two world wars, which made the production of a classic pot distilled applejack economically impractical. Nowadays, however, enough people are interested in authentic products that a company like Tom’s Foolery can enjoy success producing an applejack made entirely from apples!

Here are some more details on malting: