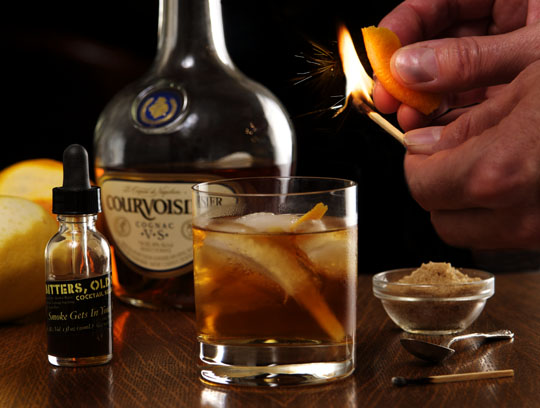 Because I love the interconnectedness of all things, including cocktails, My Girl Friday suggested a Daisy, which was in fashion in the 19th century, then out, then back in in the 20th, and could be again in the 21st, but not in Ohio, where ordinary citizens such as myself are unable to purchase it due to Ohio’s crazy liquor laws.

But it’s damned gloomy and wet here in Cleveland and I am loving the idea of more brandy after last week's Gascon Sidecar, so today it is the Brandie Blazer, which is in effect—connection here—an old-fashioned made with brandy. I’m adding some lemon and orange zest along with brown sugar to balance the Bitters, Old Men (I used the smoke bitters, which gives it a hint of the Islay whiskys I love, but citrus bitters or Angostura are fine). I love, love bitters, especially as the weather grows ominous and the indoors are so much more appealing.

I’m flaming both zests, a big chunk, then adding separate, nicely cut zests as garnish. Use plenty of zest oil, which really makes a difference here.

Welcome, Brandie Blazer, named in memory of a certain 12-year-old girl who insisted, insisted, we get a dog, then named her Brandie, with a heart over the i, and promptly had nothing further to do with her. So that’s what we’ll call it here, the Brandie Blazer. Where’s the “heart” option on my keypad to go over the i?