What Penny De Los Santos saw just as she was about to photograph the single meal she'd traveled thousands of miles over several times zones to capture. The city's lights went out.

"Food is important," I said to the audience at Cleveland Public Library last Thursday night. It was my first line and it got a laugh. I was surprised and encouraged. When I say that to most groups of Americans, they look at me they way cows look up from their grazing. Not even a moo.

As I said, it got a laugh, and I was surprised, but I shouldn't have been because they care about food and they knew why I needed to say it. Because for decades we forgot. We stopped paying attention, because food was everywhere. It still is. But now that it's making us sick, now that the production of it is fouling our land and our oceans, debasing the animals we eat for food and the workers who handle them, we've started paying attention.

Photographer Penny De Los Santos and chef Dan Barber came to Cleveland to talk about food. Food is, of course, so important that you can't get at it all in one story. Not even Dan Barber, who's story-telling skills are uncommonly compelling. Dan talked about whole grains, wheat and somehow made you feel like he was telling a happy/sad story about the whole history of cooking.

I asked Penny to recount her Ramadan story at the Thursday night event. It's about how food connects us; she wrote about it on her site and I'm reprinting it below. See this and more of her great pix here. Watch her tell the story at TedxAustin, linked to below, about how she actually got this image, after a sudden black out. It's a fascinating intertwining of food, images, story, and connections. I adore Penny, and I loved meeting her. Thank you Penny for coming to Cleveland and for letting me repost your story and the image that created it.

Saveur Magazine sent me on assignment late last year for a story they ran in their December 2008 issue. The assignment was a food feature on Iraqi refugees living and practicing their food traditions in Beirut. The situation was pretty intense for a photographer, let alone a western woman operating in a Hezbollah-run neighborhood where journalists, especially foreign ones, were prohibited and detained. My access was limited and quick as we didn’t want to draw too much attention to the Iraqi men, which could have been very dangerous for them.

The few nights I spent photographing these gentlemen were amazing. Photographically it was terrible, no electricity, not able to use flash (draws too much attention through the windows, raising suspicion with watchmen patrolling the neighborhood). But when they lit candles for their evening meal signifying the end of their Ramadan Fast it couldn’t have been better. The orange glow from the candles lit their faces just enough to give it the right amount of detail and emotion and capture the moment.

There we sat on the floor, cut up garbage bags as our table cloth, feasting on spiced chicken stew with chic peas. As I scooped up every bite with flat bread it all tasted like heaven. It was the best meal and the best table I ate at the entire trip. It was one of those moments I’ll always remember because of what it symbolized. The customs and cultural traditions of these Arab Iraqi men don’t allow me to socialize with them , not as a woman, nor as a journalist/photographer. It was my camera that allowed me access to their world. It was a great reminder of how much food can bring us together and give us something in common if only for a few hours. It’s funny how the most incredible experiences can happen in the hardest of situations." 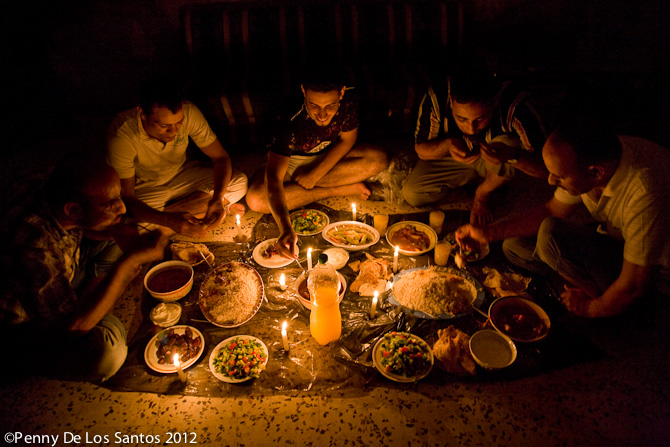 TEDxAustin: Penny tells the story of capturing the above dinner.

Food. It's important. Don't take it for granted.

If you liked this post on Penny De Los Santos & Chef Dan Barber, check out these other links: