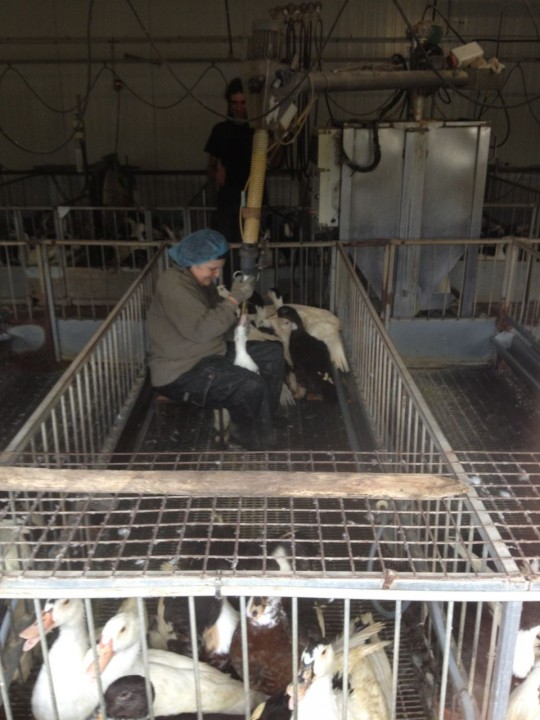 A foie gras farmer feeding her ducks during the brief period of gavage. The ducks at the bottom of the photo showed no signs of illness or discomfort (they were quite merry, actually, if that's possible). Photo by Michael Ruhlman.

Last summer, on assignment for Condé Nast Traveler, I visited a farm that raises ducks for foie gras, driven there along harrowing roads in southwestern France by Kate Hill. I'd never seen the practice, vilified in America, of force-feeding ducks and, being in the land of foie gras and confit de canard, I had to see for myself. The farm, Souleilles, run by Yves and Geneviève Boissière, is wide, wide open in the town of Frespech. The husband and wife were warm and welcoming and watched me take an iMovie and iPhone pix of the practice while Yves spoke at length about the process. The ducks are pasture raised most of their lives, then force fed for 14 days, beginning with a little less than half a pound twice a day, increasing to less than a pound (400 grams) at the end. Granted, it's a lot of food for that size animal, but I saw them in the final days of their mortal coil, and they waddled happily between the old lady's legs, pointed their beaks skyward of their own accord as the woman popped the tube in and massaged the food down toward their gizzard, a process that took about five seconds. They then waddled away briskly, quacking and flapping, to the other side of the cage. They weren't crowded, showed no evidence of sickness, had plenty of room, and lived in clean pens, behaving not at all like puking frat boys stumbling all over each other but rather more like Beatrix Potter's Jemima Puddle-Duck. Again most of their lives are spent in a pasture the size of a football field. A better life than the millions of Perdue chickens enjoy surely. 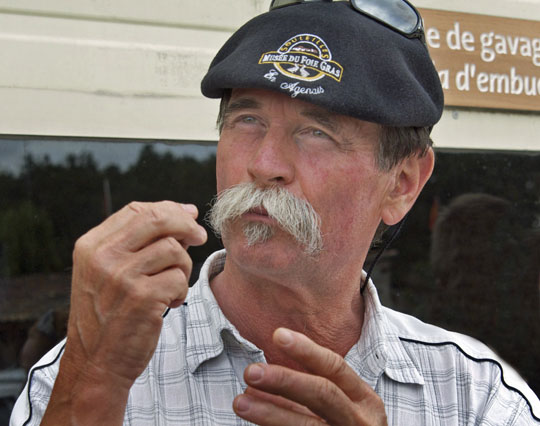 All this came to mind because of the news of the current bills lobbied for by Big Ag to make it illegal to try to record harmful farming practices in the United States. Which is hardly the exception in our factory-farming, cheap-meat country. If it were the exception, why would Big Ag be spending big money trying to prevent the harm from being broadcast?

Jedediah Purdy wrote an articulate op-ed two days ago in the NYTimes and the paper's editorial board seconded it. America doesn't need more farm secrecy, it needs more farm transparency. If you don't want someone to be allowed to film inside your building where the food our kids are eating is being slaughtered, you should be shut down until you welcome the videographer.

If you want to eat meat, I believe you should be present—or, better, a participant—in the death of at least one of the animals that you eat. I took part in a chicken slaughter last summer. It was not easy, nor should it be. I cooked the chicken I killed and gutted. I took very good care to cook it perfectly. I witnessed a humane slaughter of a Mangalitsa hog the following fall and a demonstration of how it was debristled, gutted, and broken down. I've twice visited a slaughterhouse in Ashland, Ohio, where locally raised cows are dispatched and broken down for their muscle and bone, a federal inspector checking each one (they're big animals and it's pretty gruesome). I've written about why I believe it is ethical and yes, humane, to eat meat. I think vegetarianism is a healthy and good choice if that's what you want and what your body wants. I believe that veganism is lunacy, and arguably inhumane (but a superb weight loss plan and, adhered to long enough, perhaps even an effective birth control strategy).

But regardless what I believe, we are a meat-eating country and the Perdues, McDonalds, Smithfields, Monsantos, and Cargills are going to keep it that way, have no fear. What we and, more importantly, our legislators can do is refuse to sell out to the Big Ag lobbies for their election cash and help to make animal husbandry as humane as possible nationwide and without exception. It's very, very hard given the billions of animals we slaughter yearly for food. But surely the first step is transparency, not secrecy, which these new bills are trying to ensure so that you can have your tasty McRib and boneless Kentucky Fried for pennies. It's good for big business and helps your senator and representative keep that glinting smile for the camera. But it's certainly not good for the animals we rely on for our food, which means it's not good for your family. 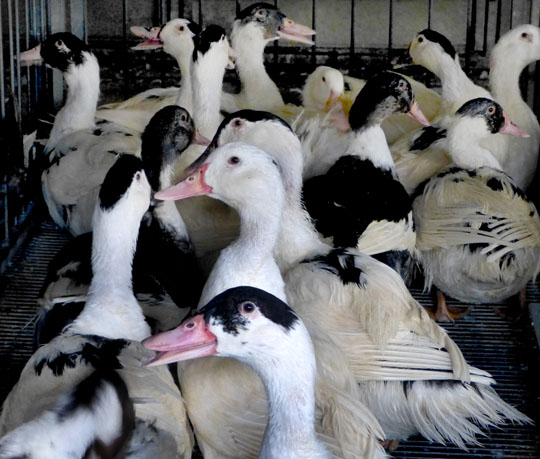 "These ducks are bound for the cassoulet pot tomorrow," says Yves, "but don't tell them, they'll go on strike."

These are happy, healthy ducks in clean uncrowded conditions. The 400,000 ducks raised for foie gras in this country enjoy the same. I wish this were true of the billions of other animals we kill for food (hello, California?!).

We, worms' meat ourselves, in Mercutio's memorable phrase, should do better. Though now that I think about it, perhaps Congress should outlaw worms?

If you liked this post, there's something wrong with you; this post should piss you off no matter whose side you're on. Keep reading: