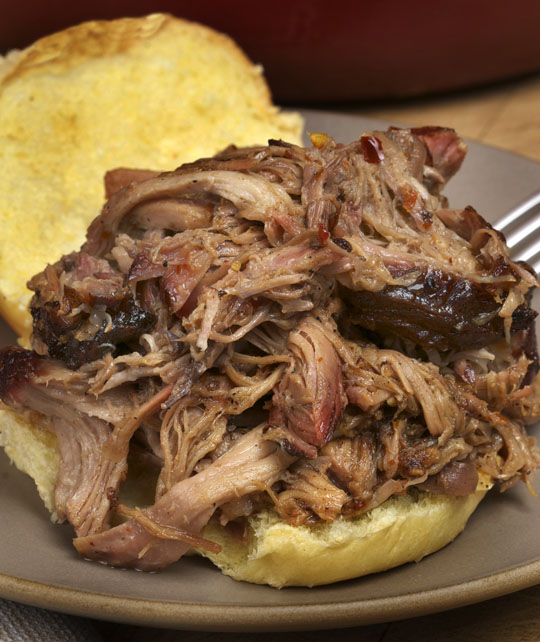 With these last few posts on cooking for groups, it occurred to me that I should post one of my go-to, fabulously easy, always-gets-raves main course that serves a lot of people.  East Carolina barbecue, called pulled pork here up north.

When I arrived at Duke University in Durham, North Carolina, from Cleveland, Ohio, in the 1980s I knew the word barbecue to be a verb. You did it on a grill. As a noun, it meant a gathering to eat food cooked on a grill—it was something you had, something you invited neighbors to.

But on the drive back from a place called Jugtown (to get there we’d gone through a town called Whynot, with a church named after the town; loved that), we stopped at what looked like an actual shack in the woods, billowing smoke, and had the most amazing true-blue unbelievable Carolina barbecue.  I remember asking, “It’s just called barbecue?”  I’d never had anything like it.  It marked my introduction to the pig.  I’d grown up with pork chops, pork roast (with Lipton dried onion soup on top), and spareribs, but barbecue was a revelation.  Sweet, sour, porky, smoky, giving a pleasure that made my spine hum.

The following recipe should be enough sauce for a 5-pound bone-in pork shoulder. How you cook it is your business.  In my pre-Big Green Egg days, I’d sear it hard over coals in the Weber, covered, then put it in a Dutch oven for 4-6 hours at 250 degrees. Now I cook it 90 percent of the way on the big green egg for serious smoke flavor. I think smoke is critical, but if you want to make it super easy on yourself, put the raw shoulder in a Dutch oven and roast it covered at 225 overnight and that’ll do the trick as well.  Stir in the sauce. Taste for seasoning—salt, sweetness, acidity,heat. Adjust as you wish.

Having a superbowl party? This is a fabulous thing to prepare. It gets better the next day, so you can make it a day ahead and reheat. A five pound shoulder will feed 20 people.

Want to read more on the history of Carolina barbecue, this is an excellent history, Flavored By Time. One of the best barbecue books I've come across recently, and it's heavily weighted in Texas Barbecue but it's a great, is Peace, Love and Barbecue.

If you liked this post on Pulled Pork, check out these other links: