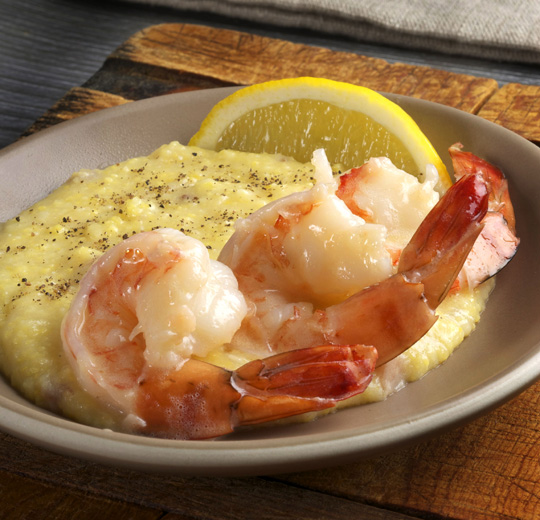 One of hard things about writing books is that they are in constant flux and then they are permanent. Thanks to the organic nature of blogs, I can make amends.

When I was at the Culinary Institute of America, one of my best and favorite teachers was Eve Felder, who taught Garde Manger. She was the Cheshire Cat of chefs, perched high on stacked stools, who taught us that "Cooking is alchemy, cooking is magic!"

And she was right. Righter than I knew, in fact.

I'm heading to her native city, Charleston, South Carolina, and so she's been on my mind. When I wanted to do a butter-poached shrimp for Ruhlman's Twenty, I naturally wanted to pair it with grits. Who did I call for grits finesse points? Chef Felder. In the editing process of the book, she was not only excised from the headnote, I failed to acknowledge her in the Acknowledgements! Herewith the original headnote and recipe.

With everlasting thanks to a great cook, great chef, great educator, Eve Felder.

(please see update at bottom of recipe for link to chef felder cooking.)

Shrimp, so often overcooked in boiling water, is perfectly and beautifully poached in butter—it remains tender, does not become rubbery, and develops an almost unfamiliar sweetness. What better to pair buttery shrimp with than butter loving grits, for one of the great regional American dishes.

I contacted my friend and former teacher, Eve Felder, a chef instructor at the Culinary Institute of America [now director of the CIA Singapore campus] and a Charleston, South Carolina, native raised on the stuff. For her, shrimp and grits was just that, little creek shrimp, floured and sautéed in butter, grits cooked with milk and water. This would not have been “dinner,” the main meal served around 2 pm, but rather breakfast or a light supper later in the evening.

“For the grits, the key is to cook them for hours,” Eve wrote to me during our discussions. “This last summer I got to starting the grits after breakfast on the stove at about 9 a.m., then put them in a crock pot to cook all day until we ate supper at 9 p.m. After a long day playing on the beach and floating down the creek, we found they had the perfect consistency. Michael, you know I'm a purist so I only eat shrimp and grits in Charleston. When I grew up we had artesian water on Sullivan's Island and the grits were unbelievable. As with all simply prepared dishes, it’s all about the main ingredients: the shrimp, the quality of butter and the quality of the corn from which the grits were made. We'd always dump the butter from sautéing the shrimp into the center of the grits on the plate. You're making me hungry.”

Thanks, Eve, you’re making us both hungry.

The following recipe keeps it simple, grits cooked with bacon and onion, shrimp gently poached in butter; the butter, flavored by the shrimp, then enriches the grits, which love, love butter.

update! just returned from an awesome dinner on behalf of Ruhlman's Twenty at Anson's in Charleston where one of the attendees, a chef, had not only read this post but had, that same day, seen a video of Eve Felder, THE chef Felder demoing fried chicken. If you want to see her cook, watch this epicurious.com video. she is her prefect self. notice how she asks you to listen to the sounds of the cooking. she doesn't have her Cheshire smile on (you only get that in person), but you get a sense of her care. What do you say--every sunday, fried chicken? i think it's a good ritual. Thank you, Eve.

If you liked this post on Do-over: Charleston, Eve, & Grits, check out these other links: