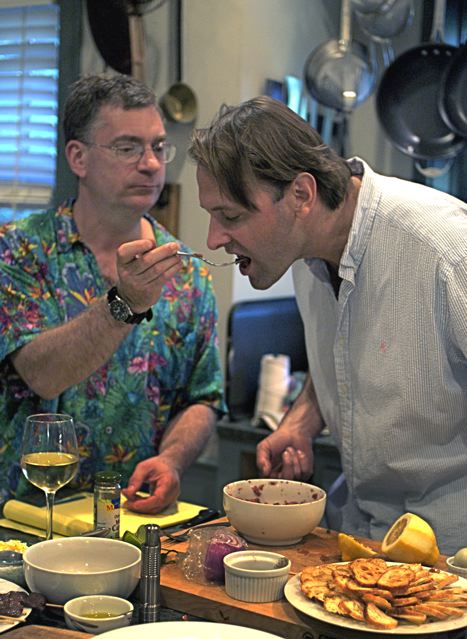 My Dinner with Pardus

Do you have any veal hearts?” Pardus asked.

The vendor, with happiness and surprise, said, “I do!” He pulled it out of the cooler and said, “How about five bucks?”

What happens when a chef visits for the weekend? My old instructor and now close friend Mike Pardus (pronounced PAR-dus—some people think because he’s a chef, it’s pronounced par-DOO) visited recently. The main fact about Michael is that he is a cook in every fiber of his body, meaning, in part, that when he’s away from his work as a chef instructor at the CIA, when he can do anything he wants because he’s on holiday, he chooses to cook all day. Which is what we did. An impromptu meal, Cleveland style. 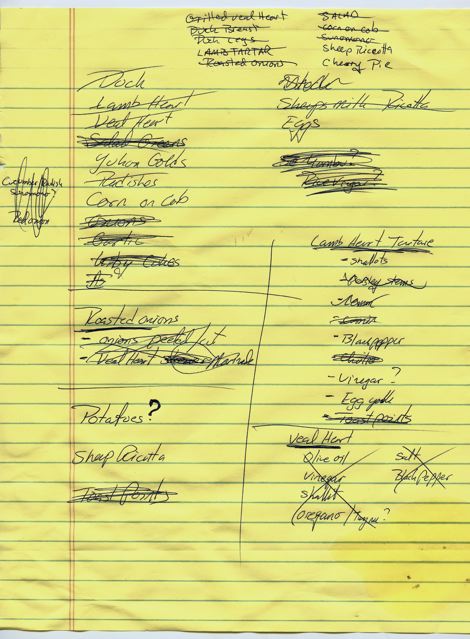 The occasion was a photo shoot—I wanted him on the back cover of the new edition of The Making of a Chef (out in April)—and so the publisher agreed to cover his flight into Clevelandtown on the 4th of July (where I fed him Vienna Beef hot dogs, which, to answer someone’s question earlier, we can buy at Miles Market, and dortmunder from Great Lakes Brewing Col., our local brew that’s as good as any artisanal beer in the country).

Next day we hit the North Union Farmer’s Market at Shaker Square, where Pardus hunted down the heart and other delectables for the evening meal—some beautiful garlic, onions, lettuces, snap peas, radishes, pickling cukes, and a fresh duck. We did the photo shoot at the nearby restaurant Fire, one of our favorites, then headed to the West Side Market, where, still with heart in our heads, we picked up some lamb hearts. (I’d just been with Cosentino who’d made a heart tartare, and had been eager to try.)

And then it was back home to cook. Pardus, a demon for organization, made the above prep list, while I began cleaning all the valves and connective tissue from the lamb hearts.

It would be a seriously high-protein meal, a kind of mixed grill idea: lamb heart tartare, grilled duck breast, marinated veal heart, cubed and skewered, and braised duck legs, along with a green salad, a great sour salad of sliced baby cucumbers and onion (Pardus called it a sunomono, a Japanese preparation), roasted onions, and corn on the cob (grilled with herbs and butter inside the husk).

We had the tartare, expertly put together by Pardus, tasting and seasoning all along the way, for hors d'oeuvre in addition to zest-laced sheep’s milk ricotta and the roasted garlic, on toasted baguette. Spicy radishes with butter and coarse salt. Duck cracklings.

Throughout the day we didn't give a thought to dessert, but the cooking gods were looking out for us. Taking a break from the kitchen in the late afternoon to walk the dog, I passed a neighbor directly behind us who pointed to a tree across the street (we live in an inner ring suburb, lots of old houses and trees)—it was virtually glowing red with ripe sour cherries. My neighbor gave me a bag and a stepladder and thus a walk with the dog gave us our dessert, a sour cherry crumble.

A great summer meal: impromptu, local, delicious. It’s been a long time since Skill Development one.

And then what happened? Following all day in the kitchen, much conversation during the meal, much wine, followed by much Cognac, the women long asleep by then, the kitchen clean, Pardus noticed a sourdough starter frothing over its cup onto the counter.

Pardus stared at it, then looked at me, dead serious, and said, “Doughnuts for tomorrow morning.” And so, at 2 am, I found myself mixing dough. Which is what happens when a serious cook comes to visit.