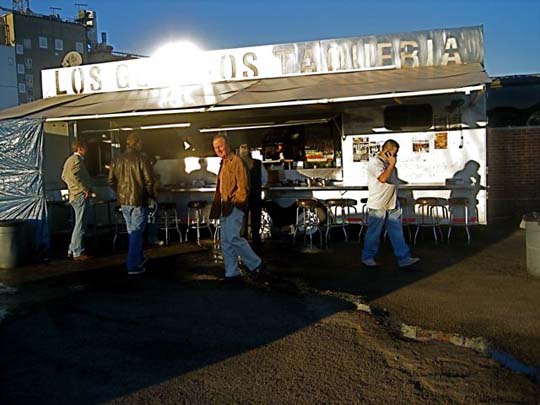 A year ago, I drove a couple hours south of Cleveland to a strip mall off Interstate 71 to film part of an episode of Bourdain's "No Reservations" heartland episode, at a stellar Japanese restaurant called Kihachi (google map it, look at all the parking lots and new housing developments). During the meal Bourdain, I made an off-handed remark about how extraordinary to find a restaurant of this caliber in the heart of Applebee's country.  That was it, that was all!  And it's still how I still see it, namely that strip malls off interstates, miles from any actual metropolis, is, indeed, Applebee's country.

Regrettably, this episode of the show featured Columbus, Ohio, the state capital, home of OSU and the Buckeyes, and the good people of this heartland city, eager for the national spotlight to show themselves off, were a tad miffed that one of their own had seemed to directly disparage their city.  I had only been there once or twice before for book events, not food tours, so I did not mean to suggest that Columbus was Applebees' country, only that ex-urban interstate cloverleafs were.

But that's not how it came off.  Talk about a hornets nest, sheesh (here's but one example, good to meet you nonetheless, Bethia!). I more or less covered my head with my arms to keep from getting clobbered and ran away.

But not for long. Aided by one of my oldest and dearest friends (a life long Buckeyes fan), a Columbus food mafia conspired to get me down there for a proper exploration (followed for all I knew by a tar and feathering).  Lured by the promise of 50-yard-line seats for the OSU-Penn State game, my friend convinced me and down we went for a 24-hour Columbus food binge, led by two lawyers, Steve Stover and Rich Terapak and one financial advisor, Jim Budros, all of the them food devotees, occasional culinary instructors, restaurant reviewers, and one of them, Mr. Budros, a principal of his financial firm, also firmly enmeshed in the food business as a co-owner of City Barbecue.

I'd been warned that we would need to be eating through the pain, something these gents seem to relish, and by the time we hit the massive buckwheat pancakes at Skillet Saturday morning, the pain was abundant.  But not from the food itself.  Skillet's rib sticking breakfasts were stellar, neo-croque madames (my fave) and stinky cheese omelets, griddle cakes and sausage would hold us till the game later on that amazingly warm sunny November day.

We began the trip early the previous eating at the Los Gauchos food truck for tacos (pictured above)—and they would remain perhaps my favorite dish of the entire visit.  I love genuine tacos.  What followed  was a stop at Middle West Spirits, a new micro distilleryl working in vodka, of all things.  I was dubious, as vodka by federal definition should have no aroma or flavor.  But theirs did, but also, distilled at 195 proof remained vodka, so much so that the Gray Goose we tasted next to their OYO seemed by comparison better suited to a cotton ball on a flesh wound.

The coolest part what owners Brady Konya and Ryan Lang are doing is making this premium hooch from locally sourced soft red winter wheat.  Cooler still, they have used the same wheat to create a whiskey, which is the same stuff as the vodka, distilled at a different proof and aged in barrels.  But exact same grain.  Amazing stuff.

From there to local favorite Alana's.  What my pal Lester and I loved about this place, beside the excellent chuck, was the retail wine case and $5 corkage fee.  Brilliant.

Next up, Basi Italia, chef-owned by the affable Johnny Dornback and his wife Trish Gentile, followed by Rigsby's Kitchen, both superb.

The next morning up early for dry-cured sausages and pate, the breakfast of champions, at Thurn's, a 125-year-old family business. Next on to Mr. Budros's kids bakery and patisserie, Pistachia Vera. Spencer, who leads the kitchen, and his sister Anne have created a fabulous shop, that would more than hold its own in New York or Los Angeles. Spencer said he'd put his macaroons up against any in the country. I would only change that to add, brioche and croissant dough as well. I terms of technical accomplishment, this was the highlight, and situated as it is in the heart of the very cool neighborhood known as German Village, it was also a very pleasant spot simply to arrive at.

We followed Skillet with the North Market, a killer collection of shops, artisan bread, great cheese, and locally sourced meat, fresh spices, Jeni's Ice Cream, fabulous stuff (and her vanilla-cranberry combines the efforts of four local businesses, including the OYO vodka, in which the cranberries soak), not to mention a grand of great prepared foods.

And we concluded the tour with pre-game Texas-style barbecue at City Barbecue.  Co-founder Jim Budros has created a great model for this kind of barbecue (not to mention incredibly succulent brisket).  Wish Cleveland had one!

I'm willing to say now that Columbus exceeds Cleveland as a worthy food destination. And what that means is that Ohio itself has become an awesome food state.

Thank you, Columbus food mafia for the tour and the game.  Go, Buckeyes!

Previous Post: « Weekly Menu Planning: Be Organized
Next Post: How To Make Thanksgiving Gravy: It Starts with Turkey Stock! »