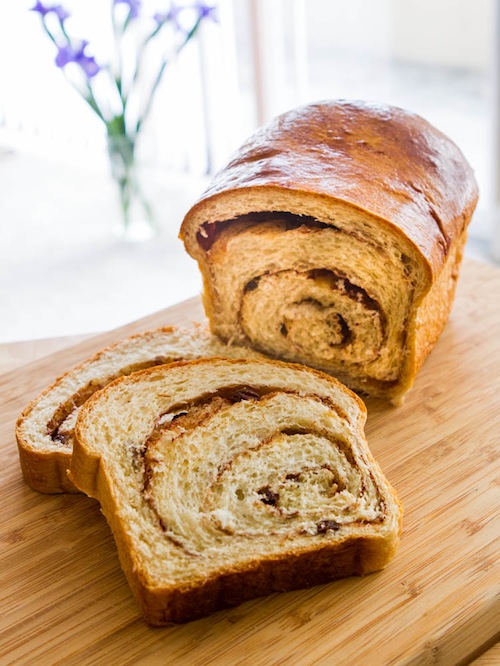 Freshly baked cinnamon bread is a great baking item to add to the holidays.
Photo by Stephanie J. Stiavetti

I'm giving my site over today to my friend Stephanie Stiavetti, who writes The Culinary Life blog, and whose first book, Melt, will be published next year by Little, Brown. Here she focuses on cinnamon at a time of the year when the smell of cinnamon announces the celebratory nature of the month and soothes stress. It's true, the smell of cinnamon bread baking makes for a better mood around the house.

A note about yeast and temperatures—many novice bakers get in a fluff about it. Fresh? Active dry? Instant dry? What's it all mean? I'm not going to go into it because it's boring—use dry, it doesn't matter what kind (I recommend Red Star or SAF, same company). You don't need to be obsessive about the temperature of the liquid. This recipe will work if you throw all the bread ingredients into the bowl cold and mix. Steph calls for 100–110˚F milk. This step gets the yeast activated fast and thus reduces rise time. Go higher than 120˚F and you risk killing the yeast.

This is a fabulous recipe—leftovers can be sliced and frozen in foil, then toasted. What more useful affection can you show your kids or spouse than a breakfast of toasted cinnamon bread slathered in butter? Thank you, Steph!—MR

Cinnamon has earned a permanent place in the pantheon of comfort food. It photobombs a vast array of recipes, especially in winter, appearing in countless cookies, pies, and other blissfully warming dishes. I've developed more cinnamon recipes than I can possibly count, but my personal favorite remains a simple cinnamon bread, mostly because there's not a lot competing with the primary flavor component.

I didn't grow up with cinnamon bread. Rather, I found it as an adult, once my tastes had refined and I'd stopped lusting after anything with enough sugar to fly an elephant to the moon. As a result, this recipe is less a sugary treat than it is an amiably sweet, delicately spiced bread. In my opinion, most cinnamon bread recipes taste good for the first few bites, until you've gotten a few tablespoons of gooey saccharine filling under your belt and the sudden urge kicks in to reach for an insulin shot. In this recipe I opted to decrease the amount of sugar in the filling by over half, and added a touch of nutmeg and salt to round out the cinnamon's quick, heady personality. The result is less dessert-y and more breakfast-worthy, which is exactly how I prefer my baked goodies. If you want a sweeter experience, a swath of maple butter is a perfect something-something to take each slice to the next level.

Another thing I've noticed in a lot of cinnamon bread recipes is that the filling is incredibly flavorful, but the bread itself is relatively bland. To me, this always seemed like a waste of 75% of the loaf's bulk. Is the bread simply a delivery device for the filling? In my little corner of the culinary world, no. So, in an effort to balance out the bread's overall flavor, I removed some of the cinnamon from the filling and added it to the dough itself, giving the entire loaf a warm glow of winter spice. In this dish you won't have to wait for a bite of filling before the cinnamon starts to work its spell—you get a gentle kiss right away.

This bread begs to be sliced thick, toasted crisp, and blanketed in plenty of salted butter. Given how much sugar I've taken out of the bread, please go overboard with the dairy.