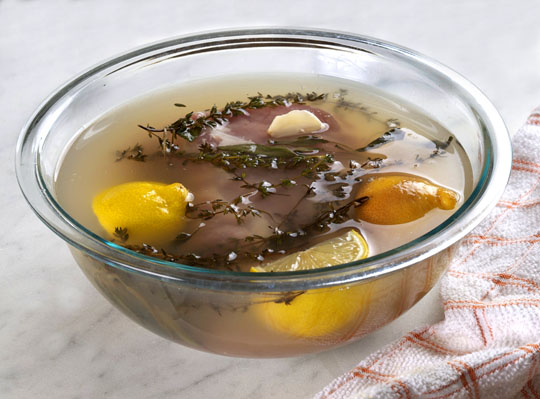 Brining in one of the most powerful forms of seasoning, flavoringand curing meat.  Disperse salt and aromatics in water, then submerge a whole muscle into that salted flavored water.  Water surrounds the meat delivering by osmosis salt and flavor into the meat.  Some may argue that flavor molecules are too big to enter the meat, but my tasting experience says flavors of herbs definitively get into the meat.

Brining basics are few: It's best to weigh your salt so you know exactly how much you have. Make sure your brine is cool if not cold before you put the meat in.  Always refrigerate your meat as it brines. Make sure your meat is completely submerged; some cuts want to float, in which case you'll need to weigh the meat down.  When it's finished brining, rinse the meat and pat it dry.  Discard the brine (never reuse brine).

Finer points of brining.  My ideal brine is 5% salt concentration, or 50 grams per liter of water (yay metrics!) or 1.6 ounces per quart (boo imperial measures)—if you don't have a scale, use three tablespoons Morton's kosher salt per quart. I've found you can brine meat indefinitely in a 3% brine, but 5% give me just the right strength for speed without the worry of making the meat too salty.

I like to rest meat for several hours (and up to a couple of days) to allow the salt concentration to equalize throughout the meat.

I cook my brine to infuse it with flavor. But to speed up the cooling time, I use half the water to cook the ingredients and dissolve the salt, then add the remaining water as ice.

Brining seriously inhibits spoilage bacteria, so you if you want to preserve meat, brining it is a great strategy.

Here's a recipe for Canadain Bacon and Peameal Bacon, sometimes called back bacon, because it uses the pork loin, which runs along the back of the hog on either side of the spine.  Canadian bacon is hot smoked—that is smoked and cooked; peameal bacon is rolled in corn meal (it used to be rolled in dried ground peas according to wikipedia).  Some commenters note below that it's rarely pre-cooked (as Canadian bacon is).  It can be pre-cooked to the temperatures Canadian bacon is smoked to, but I think they're completely justified in recommending slicing and frying, or the best cooking method, grilling over coals.  If you've go a lot to brine, this is easily doubled. This brine will be sufficent for 1 pork loin between 1 to 2 kilos, 2 to 4 pounds.

If you liked this Canadian Bacon recipe, check out these other charcutepalooza and brining posts: