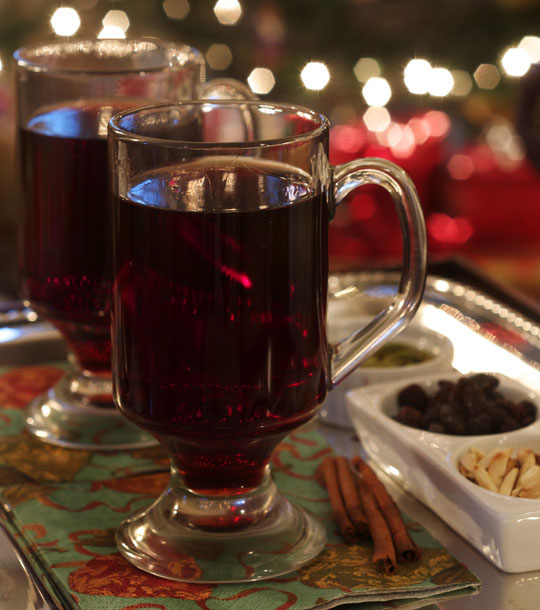 Glogg was a staple of my childhood Christmases. Photo by Donna Turner Ruhlman

I'd been looking for a long ago recipe card used by my parents titled "Britta's Glogg" to do a post about it (and because I hadn't made it in years). Then all of a sudden I start seeing recipes for mulled wine all over the place. I don't remember seeing any in years and then, two different ones from just in the NYTimes alone, one in the Sunday Magazine, another by writer Melissa Clark.

It was not the drinking of the glogg that stays in the memory—it wasn't till later that I would actually have been drinking it—it was the aroma of it. I've recently become aware of how powerful the smells of food cooking in house are. They are a natural stress reliever. When I made a batch of glogg this year, the first thing Donna said upon entering the kitchen was "What smells so good in here." So I recommend making this for the aroma alone.

Back in the seventies, my mom used a gallon jug of Carlo Rossi "burgundy." The adults also often liked it spiked with vodka. Some how, port made it into the recipe, perhaps to make up for the crappy wine. The following was given to us by a talented textile designer from Sweden, Britta Engstrom, who taught at The Cleveland Institute of Art and had become friends of my parents. It's very similar to the recipe in the NYTimes magazine by Annika Sundvik, New York City chef and Stockholm native, dominated by cardamom and clove. I like the idea of orange peel and ginger in hers.

Britta's glogg couldn't be simpler. Her family served it garnished with toasted almonds and raisins (as does this glogg recipe, which uses port, bourbon, and rum). Now that we have decent wine available, Britta's Glogg is much better than when I was a kid.

Other recipes for hot holiday libations

Buttered Rum (as has been noted before, this is one of those drinks that sounds a helluva lot better than it is)

If you liked this post on Glogg, check out these other links: