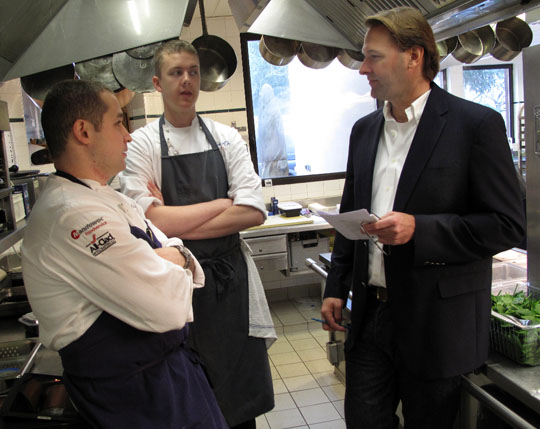 A chat with James Kent, left, and Tom Allan during final-day prep (Photo by Joshua David Stein for eater.com)

We met Team USA this morning in the Paul Bocuse commissary a half mile down the road from his restaurant. The team was finishing their mise, checking it, and checking it again. A box of Chef’s Garden micro tarragon and teensy radishes had arrived, the produce in pristine condition. Commis Tom Allan prepped langoustine (they will be part of the fish platter and can be taken from their shell now but not prepped till tomorrow).  These, like the greens and another part of the monkfish were shipped from the states because Kent and the others were unhappy with the quality.  They were re-cooking the monk to make sure there were no surprises—tomorrow, in the box, their tiny cooking compartment.

It was an easy kitchen day, with time for talk and reflection, while the crew from DC, which has been documenting the entire process for a four-part series to be broadcast on A&E, filmed final prep.

I have to admit, I was worried about Team USA.  James Kent is 31, he’s been sous cheffing for the past several years, which means he manages the cooks, doesn’t do a lot of cooking himself—your cooking muscles can get soft.  Moreover, he has zero competition experience.  His commis, Tom Allan, just slid under the eligibility age, at 23 years old—even less experience.  These guys are attempting to best last year’s chef, French Laundry CDC Timothy Hollingsworth and the 2003 finish by Hartmut Handke, a long-time competition veteran and cooking animal, according to his colleagues. Both finished in 6th place, the best the USA has done.

But today I saw their plan, not only their minute-by-minute schedule when they begin cooking tomorrow at 10 am (4 am eastern) and some of their swank display platters, but also heard the entire philosophy behind their platters and garnishes, which are deeply personal for Chef Kent.

Coach Kaysen, whom I first met filming Next Iron Chef for Food Network, and who competed for the Bocuse in 2007, walked me through the food and I, skeptical of most platters, was truly impressed—they are innovative without losing touch with classical technique, emotion- and place-based without being inaccessible to other international judges. Kent is a mixture of NYC-cocky and cook-humble, a good combination in this case, I think. Tom Allan is fresh out of Per Se, a kitchen whose exacting standards will serve him well here.

But we can only wait.  There are 24 teams in all, all of whom have worked hard—everyone works hard. Everyone presumably is a pretty damn good cook.  Surprises are inevitable—ask Kaysen, who, when he competed went to look for finishing garnishes for his platter only to find that a Bocuse d’Or helper had eaten them! He’s still shaking his head about that one.

Tomorrow we’ll see if the new backing and support from Keller and Boulud and proper sponsorship, and a full year of training, a full year devoted to creating and preparing the two very American dishes, simultaneously old-fashioned and innovative, rustic and intricate, via the craftsamanship of Kent and Allan will earn a position on the winner’s podium.

You know what they say, when you learn as much as these young cooks have in their year-long odyssey, well, everyone’s a winner—right?

Wrong.  Only one team will take home the gold tomorrow.  I’m rooting hard for Team USA.

Please have a look at today’s post by Joshua David Stein, eater.com’s senior editor for more of the conversation from today’s kitchen. Joshua and I were brought to Lyons to cover this event for All-Clad, one of the team’s main sponsors, something I was eager to do. I’m an unabashed fan of All-Clad (they're not paying me anything, just footing travel and this fine Hilton Hotel, I can say what I want), and I was really really eager to check out the scene at what may be the world’s most prestigious cooking competition, one that the US has only just these past few years embraced.

Also have a look at Joshua’s flicker page for more pix from yesterday and today.

We’ll both be tweeting tomorrow throughout the competition (they must finish by 9:30 am Eastern time), using the hashtag #bocusedor.  Or follow Joshua and me on Twitter.