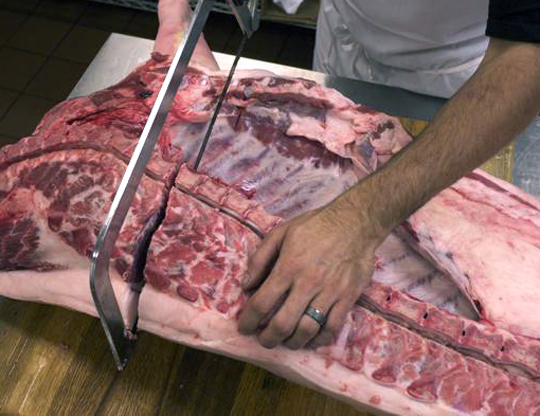 The first cut, breaking down a hog American style, photo by donna

I’m grateful to Abigail Blake, an American living, cooking, and blogging on the island Tortola, for her comment on my most recent mini-post:

I like this explanation from a 1913 Websters: “An artist is one who is skilled in one of the fine arts; an artisan is one who exercises any mechanical employment. A portrait painter is an artist; a sign painter is an artisan, although he may have the taste and skill of an artist. The occupation of the former requires a fine taste and delicate manipulation; that of the latter demands only an ordinary degree of contrivance and imitative power.”

Basically, almost any butcher who doesn’t deal in mass production could be considered an artisan. “Artisan” and “artisanal” are certainly useful terms. But they’re overused and now have connotations well beyond their definitions, especially among the foodie community.

Well put!  Artisan and artisanal are indeed over used to the point that they've been co-opted by big business and turned into marketing terms. And within the passionate food community the words have even taken on moral implications.

Artisan means: a worker skilled in a trade; craftsman (this from my Webster).  It does not mean artist. I love the idea that a sign painter is an artisan.  I hate the idea that any butcher would call himself or herself  "an artisan butcher." (I feel the same about chefs who call themselves artists; any one who says this outright certainly is not.) Though it seems fine to me if you want to apply artisan to a butcher you know as a way of implying that he  cares about the quality of his work (or her work, but girl butchers are few, see link below to an article on them) and grows increasingly good at it.  Butchery, like any craft, is something you practice, something at which you can always, always, get better.

An artisan butcher is one who makes the best possible use of each animal he puts hand and knife to, and, importantly, one who wastes as little of that animal as possible.  How an animal is to be used should determine the way it is broken down.  The American way of breaking down a pig is very American, in my opinion, a kind of brutal sectioning off into rectangles, without regard to the noble beast itself (pretty much what we did to the country).  It's not without reason—the method is to maximize the middle of the pig which are it's most lucrative parts.  In Italy—as we learned recently from Kentucky chef Jay Denham, whom I wouldn't hesitate to call an artisan butcher and who staged for many weeks under various butchers in Tuscany and Emilia-Romagna—when the pig will be turned into salumi, the butchery is designed to maximize that salumi.  In the photo that leads this post, the butcher is cutting straight through the coppa, the neck-shoulder muscle that is one of the best for dry-curing.  You wouldn't see a shoulder handled this way in Italy, but in America, it's perfect for Carolina barbecue.

Portland, OR, chef Adam Sappington, this spring, demonstrated how he broke down his pigs at his nose-to-tail restaurant, Country Cat.  He described each cut, not anatomically, but rather in terms of how he served it on a plate. He was proceeded by Dominique Chapolard who demonstrated his cuts, which he defined by how he sold them at his market in Gascony (you can study butchery, via Kate Hill, with this butcher, something I must do before I die!).

The only thing I don't like about the word artisinal are the implications of moral superiority.  An artisan may well be superior, but I don't think moral has anything to do with it.  It's this specious use of the word that grates.  Use artisan and artisanal to denote craftsman and good craftsmenship, not artistry.

I've compiled a list of the butchers below from comments left on the mini post in the order they came in, for those who are interested:

Vadim Akimenko is working on opening up a shop in Cambridge, Mass.

Chef Champe Speidel of Persimmon in RI is set to open in the fall Persimmon Provisions, an artisan butcher shop in Barrington.

Revival Meats in Texas raises heritage pigs (like Magnalitsa) and cattle. I know Morgan provides cuts to some businesses and individuals and Houston, and does some of his own curing, but I don’t know if he considers himself a butcher.

Christoph Wiesner as seen on the woolypigs blog

La Boucherie in Oklahoma City is great. This was started by Brothers Alain & Michel Buthion to supply their La Baguette Bistro.

Ryan Hardy and team at the Little Nell in aspen

"The ideal butcher would also have experience on a slaughter line, where artisan practices are just as critical to the end product (not to mention welfare of the livestock and workers). Heck, if they have experience raising livestock, too, for meat, then you’re getting close to batting 1000," says Carrie Oliver, of the artisan beef institute.

Thanks, all, for the comments!